In a World Without Betty White 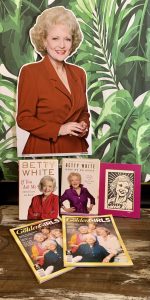 Betty White made millions of TV viewers smile over a staggering 7 decade career. Each project was further proof of her commitment to excellence for her audience. May she rest in peace.

Have you ever known someone whose presence in your life blessed you; uplifted you; made you better?

That’s how she became a seven time competitive Emmy Award winner and the First Lady of American Television.

The Golden-Con crew of organizers are like millions of fans around the world in that we did not have the privilege of getting to know Miss White personally.

But just like each and every one of her millions of fans, we loved her just the same.

Each time we switch on a TV, we’ll be blessed to share — right alongside those millions of fellow fans — in the golden legacy of laughter and positivity she leaves behind.